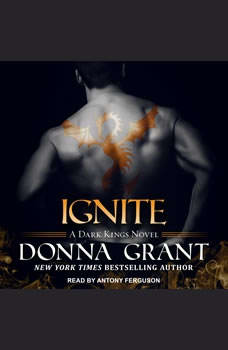 Every inch of him was molded as if from granite . . . and her blood ran like fire . . . For centuries, V has waited to awaken from his doomed sleep and reclaim his destiny. But this Dragon King-one among a legion of legendary warriors sworn to protect the human race from darkness-must first find a way to win back his sword. Wield its power. And try not to fall prey to his own illicit desires. Claire may possess the beauty and soul of a goddess but V knows better than to mess with a mere mortal. Still, he instinctively knows that Claire is The One who can help him regain the use of his sword and restore his place at Dreagan. But if she learns the truth about who-and what-he really is, her memories of him would be erased forever. How can V love Claire truly, madly, deeply . . . and protect her from the forces of fire and darkness that could destroy them both? Contains mature themes.