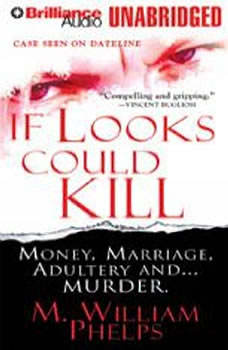 If Looks Could Kill

“A great true crime story…Readers will feel the effects of Phelps’ skill from beginning to end.” - Stephen SingularBig and brash, Jeff Zack didn’t hide his rough lifestyle. And when he died, it was in plain sight: executed in the parking lot of a BJ’s Wholesale Club in Akron, Ohio, by a motorcycle-riding assassin dressed in black.“Phelps uses a unique combination of investigative skills and narrative insight to give readers an exclusive, insider’s look.” - Anne BremnerJeff Zack’s murder stunned investigators - but then, so did his life. A long list of people might have had reasons to want Zack dead, including the loyal wife he had humiliated and the wealthy nightclub owner whose wife - a blond, hard-bodied beauty queen - he openly dated. But the truth would get even stranger…“Phelps is a first-rate investigator.” - Dr. Michael M. BadenIn this shocking true story of adultery, mind games, lies, wealth and sexual liaisons in upscale Middle America, true-crime master M. William Phelps tells the astounding story of a man who loved the wrong woman - and was brutally murdered by a killer with the deadliest possible motive of all…

THIS WAS A WELL WRITTEN BOOK. AND VERY INTERESTING. IT WAS SO GOOD I HAD TO LOOK UP THE LASTEST ON THE STORY ON THE INTERNET.