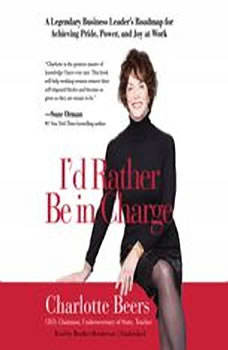 Id Rather Be in Charge: A Legendary Business Leaders Roadmap for Achieving Pride, Power, and Joy at Work

Throughout her illustrious career, Charlotte Beers has been a CEO, a chairman, an undersecretary of state, and the first woman to appear on the cover of Fortune magazine. But none of those titles compare to what Charlotte is called today: a teacher, educating women across the United States and Europe on how to break the glass ceiling in what she calls the era of forging ahead for women. Now, Charlotte shares her extensive knowledge and experience in Id Rather Be in Charge, detailing concrete solutions to the most serious issue facing working women today: though exceptionally qualified, willing, and ready for the challenge, many are not yet in positions of influence and leadership in the industries they represent. Told in an intimate and honest style, Id Rather Be in Charge is part personal history, part pragmatic guide, as Charlotte describes her own experiences, stories from her students, and lessons from her peers. By chronicling both successes and mistakes, Charlotte illustrates the universal message that finding your own personal style of leadership is the only way to take charge and find meaning and joy in the everevolving workplace of today. Id Rather Be in Charge is a breakthrough book, a master class for women who are ready to learn how to shatter the glass ceiling, reach the corner office, andabove alldevelop their highest self in the workplace and beyond.

An astonishing—and astonishingly entertaining—behind-the-curtain history of Hollywood’s transformation over the past five decades as seen through the agency at the heart of it all, from the #1 bestselling co-author of Live from Ne...

Following the success of The Accidental Billionaires and Moneyball comes Console Wars—a mesmerizing, behind-the-scenes business thriller that chronicles how Sega, a small, scrappy gaming company led by an unlikely visionary and a team of rebe...

A deep dive into the race to develop and perfect the driverless car—an innovation that promises to be the most disruptive change to our way of life since the smartphone—by a veteran insider of the automotive and tech worldsIn ...

To Pixar and Beyond: My Unlikely Journey with Steve Jobs to Make Entertainment History
by Lawrence Levy

The never-before-told story of Pixar's improbable success. “Hi, Lawrence?” the caller asked. “This is Steve Jobs. I saw your picture in a magazine a few years ago and thought we’d work together someday.” After Ste...

Here are two well-known facts:Artificial Intelligence is reshaping the world as we know it.The United States has long been, and remains, the global leader in AI.That first fact is correct. But in his provocative new book, Dr. Kai-Fu Lee—one of...

Presto!: How I Made Over 100 Pounds Disappear and Other Magical Tales
by Penn Jillette

An unconventional weight loss tale from an unconventional personality—Penn Jillette tells how he lost 100 pounds with his trademark outrageous sense of humor and biting social commentary that makes this success story anything but ordinary. ...

Everyone knew it was crazy to try to extract oil and natural gas buried in shale rock deep below the ground. Everyone, that is, except a few reckless wildcatters - who risked their careers to prove the world wrong. Things looked grim for American ...