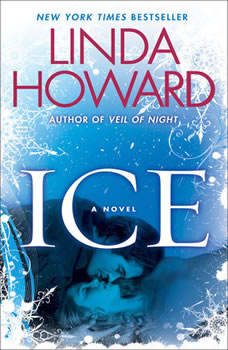 ’Tis the season for mistletoe and holly, Santa . . . and suspense. And the gift that keeps on giving is Ice: premier thriller author Linda Howard’s breathless tale of a man, a woman, and a battle for survival against an unforgiving winter–and an unrelenting killer. Oh what fun it is to read.

Gabriel McQueen has only just arrived home on holiday leave from the service when his county-sheriff father sends him back out again with new marching orders. A brewing ice storm, and a distant neighbor who’s fallen out of contact, have the local lawman concerned. So he enlists Gabriel to make the long haul to the middle of nowhere, and make sure Lolly Helton is safe and sound. It’s a trip the younger McQueen would rather not make given the bitter winter weather–and the icy conditions that have always existed between him and Lolly.

But there’s no talking back when your dad is the town’s top cop. And there’ s no turning back when night falls just as Gabriel arrives–and discovers that the weather outside isn’t the only thing that’s frightful. Spotting strangers in Lolly’ s home–one of them packing a weapon–is all it takes to kick Gabriel into combat mode. And his stealth training is all he needs to extract Lolly from the house without alerting her captors. But when the escape is discovered, the heat–and the hunt–are on. And the winter woods are nowhere to be once the ice storm touches down, dropping trees, blocking roads, and trapping the fleeing pair in the freezing dark.