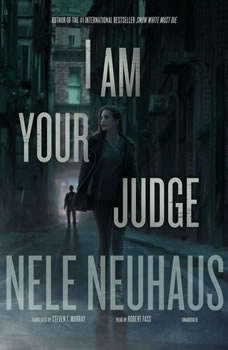 I Am Your Judge

Detective Pia Kirchhoff is about to set off on a long-delayed honeymoon, when she receives a phone call. An elderly woman has been shot and killed while walking her dog. A short while later another murder is committed, and the modus operandi is eerily similar: a woman is killed by a bullet that smashes through her kitchen windowand in both cases the same weapon fired the shot. Two more murders follow in short order. None of the victims had enemies, and no one knows why they were singled out. As fear of the Taunus Sniper grows among the local residents, pressure mounts on Detective Kirchhoff. She and her partner, Oliver von Bodenstein, search for a suspect who appears to murder at will, but as the investigation progresses, the officers uncover a human tragedy. With a story ripped from the headlines, I Am Your Judge is tightly plotted and delivers surprise twists at every turn.

I Am Your Judge
The Bodenstein & Kirchhoff Seri...