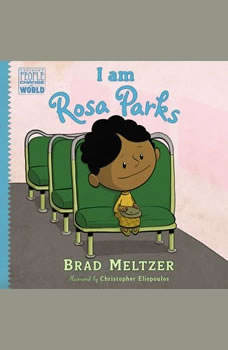 I am Rosa Parks

"We can all be heroes" is the message entertainingly told in this biography series from #1 New York Times Bestselling author Brad Meltzer.

“Kids always search for heroes, so we might as well have a say in it,” Brad Meltzer realized, and so he envisioned this friendly, fun approach to biography – for his own kids, and for yours. Each entry tells the story of one of America’s icons in a vivacious, conversational way that works well for the youngest children, those who aren’t quite ready for the Who Was biography series. Each focuses on a particular character trait that made that role model heroic. For example, Rosa Parks dared to stand up for herself and other African Americans by staying seated, and as a result she helped end public bus segregation and launch the country’s Civil Rights Movement.

This engaging series is the perfect way to bring American history to life for young children, providing them with the right role models, supplementing Common Core learning in the classroom, and best of all, inspiring them to strive and dream.

I am Rosa Parks
Ordinary People Change the World