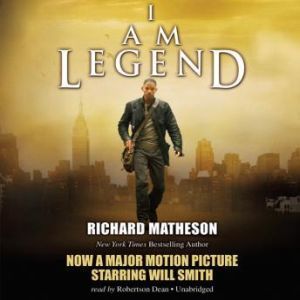 I Am Legend tells of a terrible plague that transformed survivors into bloodthirsty creatures of the night. Robert Neville is the last living man on earth. How long can he survive in a world of vampires?

I admit I only listened to this book in anticipation of the movie. I had higher expectations, and felt the ending was a let down.

If you are looking for all of the action and drama of a Hollywood action movie you have come to the wrong place. This thought provoking book written in the 1950's makes one think about their own destiny and just how quickly societal norms can change. Robert Neville's statement couldn't be more true. Normalcy was a majority concept, the standard of many and not the standard of just one man. Ironic that the vampires and vampire mutants judged the last man on earth as abnormal. But to them he was. He was to become, a Legend.

I read the book after watching the movie I am Legend, not Omega Man, which is terrible. It's an old-school thriller pre-Stephen King that has a Twilight Zone feel to it. I wouldn't have read it if I didn't like the movie, and I strongly prefer the movie. Except for the basic premise, the two have very little in common. As a horror book, it's okay. It's a great idea, and when the story is good, it's great. But, it's long on suspense and short on real action, and as the idea of the book suggests -- the last living normal person in LA -- there is a lot of introspection, which really gets old as the plot progresses. And the ending is entirely unsatisfying and random. If you loved the movie and weren't a Richard Matheson fan before, the novel won't make you one.