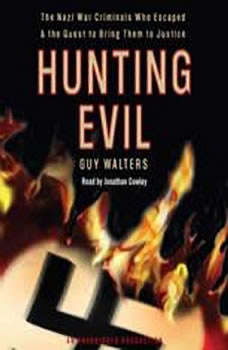 Hunting Evil: The Nazi War Criminals Who Escaped and the Quest to Bring Them to Justice

Already acclaimed in England as "first-rate" (The Sunday Times); “a model of meticulous, courageous and path-breaking scholarship"(Literary Review); and "absorbing and thoroughly gripping… deserves a lasting place among histories of the war.” (The Sunday Telegraph), Hunting Evil is the first complete and definitive account of how the Nazis escaped and were pursued and captured  -- or managed to live long lives as fugitives.

At the end of the Second World War, an estimated 30,000 Nazi war criminals fled from justice, including some of the highest ranking members of the Nazi Party.  Many of them have names that resonate deeply in twentieth-century history -- Eichmann, Mengele, Martin Bormann, and Klaus Barbie -- not just for the monstrosity of their crimes, but also because of the shadowy nature of their post-war existence, holed up in the depths of Latin America, always one step ahead of their pursuers.  Aided and abetted by prominent people throughout Europe, they hid in foreboding castles high in the Austrian alps, and were taken in by shady Argentine secret agents. The attempts to bring them to justice are no less dramatic, featuring vengeful Holocaust survivors, inept politicians, and daring plots to kidnap or assassinate the fugitives.

In this exhaustively researched and compellingly written work of World War II history and investigative reporting, journalist and novelist Guy Walters gives a comprehensive account of one of the most shocking and important aspects of the war: how the most notorious Nazi war criminals escaped justice, how they were pursued, captured or able to remain free until their natural deaths and how the Nazis were assisted while they were on the run by "helpers" ranging from a Vatican bishop to a British camel doctor, and even members of Western intelligence services.  Based on all new interviews with Nazi hunters and former Nazis and intelligence agents, travels along the actual escape routes, and archival research in Germany, Britain, the United States, Austria, and Italy, Hunting Evil  authoritatively debunks much of what has previously been understood about Nazis and Nazi hunters in the post war era, including myths about the alleged “Spider” and “Odessa” escape networks and the surprising truth about the world's most legendary Nazi hunter Simon Wiesenthal.

From its haunting chronicle of the monstrous mass murders the Nazis perpetrated and the murky details of their postwar existence to the challenges of hunting them down, Hunting Evil is a monumental work of nonfiction written with the pacing and intrigue of a thriller.