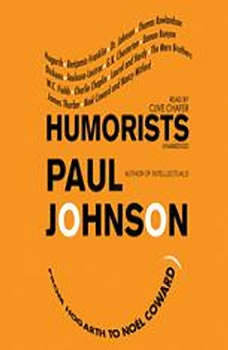 Humorists: From Hogarth to Nol Coward

In Intellectuals, Paul Johnson offered a fascinating portrait of the minds that have shaped the modern world. In Creators, he examined a host of outstanding and prolific creative spirits. And in Heroes, he brought together a galaxy of legendary figures from the annals of Western history. Now, Johnson turns his impressive intellect and piercing insight to the greatest wits in the history of the Western world. His is a selective survey across history, and includes a diverse cast of legendary humorists who got a grand kick out of life, including Benjamin Franklin and the Marx Brothers, Charles Dickens and Damon Runyon, W. C. Fields and Samuel Johnson, William Hogarth and James Thurber. Including dark humor, broad satire, bawdy wit, biting sarcasm, and more, this entertaining and erudite collection brings to life great minds who reflected on lifes follies, pretensions, and foibles with that greatest of gifts: humor.