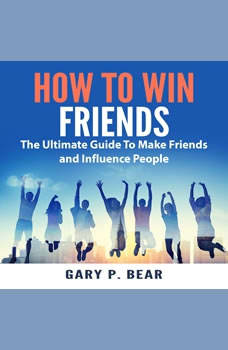 How to Win Friends: The Ultimate Guide To Make Friends and Influence People

“Friendship is a priceless treasure never to be bought or sold – it can only be cherished”.~UnknownTrue and lasting friends are priceless! They are the people who you trust with your innermost secrets and know they will be there in times of need. This book will educate the reader on how to know they have found a true friend. This method found in this book can work in both a personal and business environment. It will show how to spot a fake friend who is not what they seem and cause more drama than what they are worth.This book will open your eyes to a new way of making friends. One that is both beneficial and lasting. Friendships make sharing the things you love worthwhile. Invest in knowing how to know when you have found a true friend.

Mercury in Retrograde
by Paula Froelich

Penelope Mercury, an intrepid reporter at the New York Telegraph, has pounded the pavement for five years from city borough to borough, carrying out her boss's eccentric orders to break stories that seem inconsequential to everyone but him. Finally,...

You're the Only One I Can Tell
by Deborah Tannen

Discover the unexpected ways friends influence our personalities, choices, emotions, and even physical health in this fun and compelling examination of friendship, based on the latest scientific research and ever-relatable anecdotes. Why is dinner ...

Like most mothers, Amy Reynolds has anticipated the moment when her son brings home his first serious girlfriend. But when he does, she’s shocked to meet the girl’s father. He is none other than Nick Lowry – the college boyfriend w...

Before arriving at Oberlin in 1973, Clare Mann had never met anyone like Sally Rose. Rich and beautiful, Sally is utterly foreign to a middle-class, Midwestern Protestant like Clare—and utterly fascinating. The fascination only grows when Sall...

O's Little Book of Love and Friendship
by O, The Oprah Magazine

An evocative and heartwarming collection of essays and anecdotes from great writers and celebrated thinkers, O's Little Book of Love & Friendship will captivate anyone whose life has ever been touched by a lasting friendship or an unforgettable roma...

Life is Friends
by Jeanne Martinet

With an attitude that's savvy, sympathetic, and delightfully down-to-earth, Jeanne Martinet gives you the game plan for relearning the lost art of socializing. Forget texting, IM'ing, Facebook, and Internet "relationships". When it comes to building...

When Rachel Bertsche first moves to Chicago, she’s thrilled to finally share a zip code, let alone an apartment, with her boyfriend. But shortly after getting married, Bertsche realizes that her new life is missing one thing: friends. Sure, sh...