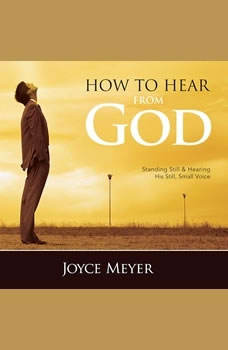 How to Hear from God

God has so many good things in store for you, and He wants to speak to you on a one-on-one basis…every day. As our relationship with God deepens, our desire to follow His guidance and be fully obedient to His plan becomes monumental. It’s not uncommon to be concerned about making a mistake or doing something wrong—but divine guidance is God’s will for His children. In this four-part teaching series you will learn the importance of developing the habit of setting aside regular time for fellowship with the Lord. You will also learn how choosing peaceful surroundings—free from gossip and slander—are most conducive to hearing God’s voice. This teaching will also show you how to open your heart to develop a special sensitivity to the many different ways you can hear God speak to you. The more time you spend with Him, the more you will get to know His voice and walk free from the deceptions of darkness.