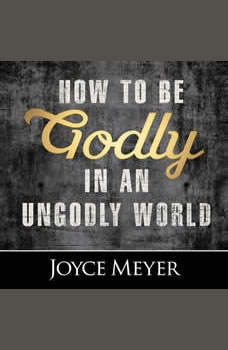 How to Be Godly in an Ungodly World

Biblical values, like honesty, patience, and compassion, are critical to the health of our society. But how many of us consistently display them in our everyday lives? Today’s culture is so lacking in integrity that things considered “wrong” 20 years ago are now “good” and “right”. Joyce delivers four thought-provoking and empowering teachings to motivate you to pursue God’s character in your own life. Discover how to… Expose the truth about what’s really “right” and “wrong”; Protect yourself from an “overactive” or “underactive” conscience; Live with holiness both inside and out. We need to make sure we’re affecting the world and that it’s not infecting us. These teachings do more than uncover the damaging costs of compromise. Use them as a personal call to take action and make a positive difference in your world and community!