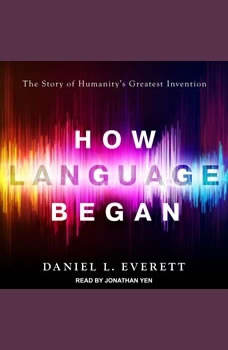 How Language Began: The Story of Humanity's Greatest Invention

Mankind has a distinct advantage over other terrestrial species: we talk to one another. But how did we acquire the most advanced form of communication on Earth? Daniel L. Everett, a "bombshell" linguist and "instant folk hero" (Tom Wolfe, Harper's), provides in this sweeping history a comprehensive examination of the evolutionary story of language, from the earliest speaking attempts by hominids to the more than seven thousand languages that exist today. Although fossil hunters and linguists have brought us closer to unearthing the true origins of language, Daniel Everett's discoveries have upended the contemporary linguistic world, reverberating far beyond academic circles. While conducting field research in the Amazonian rainforest, Everett came across an age-old language nestled amongst a tribe of hunter-gatherers. Challenging long-standing principles in the field, Everett now builds on the theory that language was not intrinsic to our species. In order to truly understand its origins, a more interdisciplinary approach is needed—one that accounts as much for our propensity for culture as it does our biological makeup.

Born To Kvetch
by Michael Wex