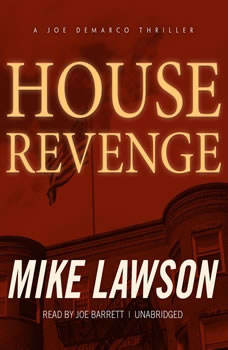 In the eleventh novel in Mike Lawsons bestselling series, Joe DeMarco helps an elderly woman threatened by a shady real estate developer, then seeks revenge. In House Revenge, congressional fixer Joe DeMarco is dispatched to congressman John Mahoneys hometown of Boston. Mahoney wants him to help Elinore Dobbs, an elderly woman fighting against a real estate developer intent on tearing down her apartment building for a massive new development. Mahoney is just in it for the free press until Sean Callahan, the developer, disrespects him, and Elinore suffers a horrible accident, likely at the hands of two thugs on Callahans payroll. Now Mahoney and DeMarco are out for revenge. DeMarco tries to dig up dirt through Callahans former mentor, along with one of his ex-wives. But when DeMarco gets a tip on the likely illegal source of some of Callahans financing, the investigation turns deadly. A fast-paced adventure into the cutthroat world behind the wrecking ball, House Revenge is another gripping tale of collusion and corruption from a beloved political thriller writer.