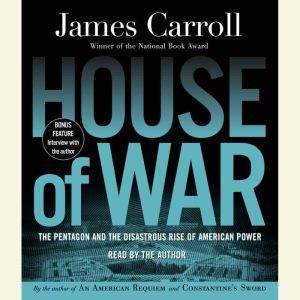 House of War: The Pentagon and the Disastrous Rise of American Power

In House of War, the bestselling author James Carroll has created a history of the Pentagon that is both epic and personal. Through Carroll we see how the Pentagon, since its founding, has operated beyond the control of any force in government or society, undermining the very national security it is sworn to protect.From its "birth" on September 11, 1941, through the nuclear buildup of the Cold War and the eventual "shock and awe" of Iraq, Carroll recounts how "the Building" and its officials have achieved what President Eisenhower called "a disastrous rise of misplaced power."

This is not faded history. House of War offers a compelling account of the virtues and follies that led America to permanently, and tragically, define itself around war. Carroll shows how the consequences of the American response to September 11, 2001 -– including two wars and an ignited Middle East -– form one end of an arc that stretches from Donald Rumsfeld back to James Forrestal, the first man to occupy the office of secretary of defense in the Pentagon. House of War confronts this dark past so we may understand the current war and forestall the next.