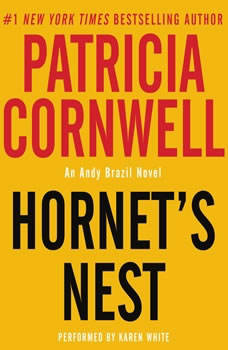 In this first title of a new mystery series, Cornwell introduces us to a dynamic trio of crime-solver in Charlotte, North Carolina: Andy Brazil, an eager young reporter; Judy Hammer, the city's police chief; and Virginia West. Hammer's deputy and a genuine head-turner. They're after a serial killer who pulls male out-of-towners from their rental cars, then mutilates, spray paints and shoots them, in that order. What the trio uncovers jolts them like the sting of the hornet—Charlotte's symbol.

I LOVE all her books. Somehow each is different but all are good! Love Hammer,West Batman and Robin in heels.