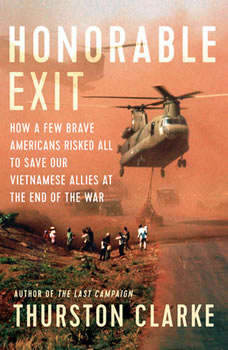 Honorable Exit: How a Few Brave Americans Risked All to Save Our Vietnamese Allies at the End of the War

In 1973 U.S. participation in the Vietnam War ended in a cease-fire and a withdrawal that included promises by President Nixon to assist the South in the event of invasion by the North. But in early 1975, when North Vietnamese forces began a full-scale assault, Congress refused to send arms or aid. By early April that year, the South was on the brink of a defeat that threatened execution or years in a concentration camp for the untold number of South Vietnamese who had supported the government in Saigon or worked with Americans.
Thurston Clarke begins Honorable Exit by describing the iconic photograph of the Fall of Saigon: desperate Vietnamese scrambling to board a helicopter evacuating the last American personnel from Vietnam. It is an image of U.S. failure and shame. Or is it? By unpacking the surprising story of heroism that the photograph actually tells, Clarke launches into a narrative that is both a thrilling race against time and an important corrective to the historical record. For what is less known is that during those final days, scores of Americans--diplomats, businessmen, soldiers, missionaries, contractors, and spies--risked their lives to assist their current and former translators, drivers, colleagues, neighbors, friends, and even perfect strangers in escape. By the time the last U.S. helicopter left Vietnam on April 30, 1975, these righteous Americans had helped to spirit 130,000 South Vietnamese to U.S. bases in Guam and the Philippines. From there, the evacuees were resettled in the U.S. and became American citizens, the leading edge of one of America's most successful immigrant groups.
Into this tale of heroism on the ground Clarke weaves the political machinations of Henry Kissinger advising President Ford in the White House while reinforcing the delusions of the U.S. Ambassador in Saigon, who, at the last minute, refused to depart. Groundbreaking, page-turning, and authoritative, Honorable Exit is a deeply moving history of Americans at a little-known finest hour.

Includes a PDF of the Principal Characters list from the book.