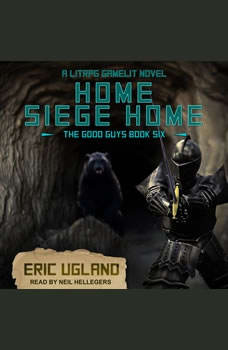 Montana Coggeshall is feeling the squeeze-and not just because of his new leather pants from the goddess Eona. His little safeholding in the ruthless world of Vuldranni is under siege. On both sides. At the front is Lord Caticorix, a grade-A Imperial flunkey if there ever was one. He's clearly ridiculous, but the army he brought with him might not be. Plus they're bent on blocking Coggeshall from getting any food or supplies from the outside world. And at the back are the ursus, the larger-than-life bear people who've traditionally called this valley home. They're none too pleased with Montana for taking in a few ursus refugees, and would like the 400-lb Goldilocks and her followers out of their house now, thankyouverymuch. Battles are brewing, and the entire town is being held hostage. And despite all his strength and ability, Montana needs to do some serious training to get Coggeshall out of this. There are actual stakes this time-children could starve, his friends have gone missing-and Montana's not sure he has what it takes to save everyone. This video game world is starting to feel way too much like reality.

The propulsive, shockingly plausible sequel to New York Times bestseller Daemon. In one of the most buzzed-about debuts, Daniel Suarez introduced a terrifying vision of a new world order, controlled by the Daemon, an insidious computer program unlea...