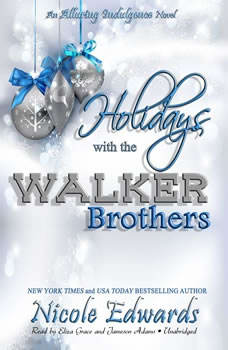 Holidays with the Walker Brothers: An Alluring Indulgence Novel, Book 4

You are personally invited to spend the holidays with the Walker brothers and their families. As with any other time of the year, the seven brothers know how to heat things up while stirring up trouble, and between Thanksgiving and New Years, they dont hold back. See how Kaleb, Zane, Travis, Sawyer, Brendon, Ethan, and Braydon spend their days and nights through the holiday season. But just a warningit doesnt snow much in Coyote Ridge, Texas, and there may just be a reason for that. This book contains sexy, smoking hot Texas cowboys that may melt the snow outside your window. If nothing else, itll warm you up for the holidays. Warning! This book contains graphic material that is not suitable for anyone under the age of eighteen.

Holidays with the Walker Brothers: ...
The Alluring Indulgence Series #4