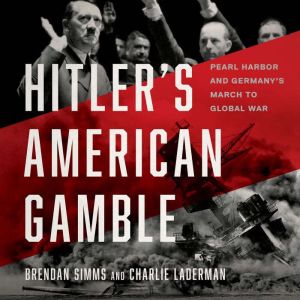 A riveting account of the five most crucial days in twentieth-century diplomatic history: from Pearl Harbor to Hitler’s declaration of war on the United States

By early December 1941, war had changed much of the world beyond recognition. Nazi Germany occupied most of the European continent, while in Asia, the Second Sino-Japanese War had turned China into a battleground. But these conflicts were not yet inextricably linked—and the United States remained at peace.

Hitler’s American Gamble recounts the five days that upended everything: December 7 to 11. Tracing developments in real time and backed by deep archival research, historians Brendan Simms and Charlie Laderman show how Hitler’s intervention was not the inexplicable decision of a man so bloodthirsty that he forgot all strategy, but a calculated risk that can only be understood in a truly global context. This book reveals how December 11, not Pearl Harbor, was the real watershed that created a world war and transformed international history.