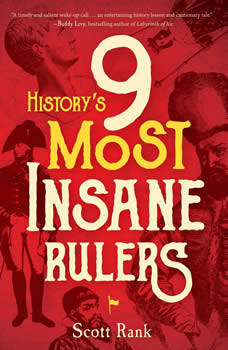 Madness and Power Can the insane rule? Can insanity be a leadership quality? Scott Rank says yes (well, sometimes) in this fascinating look at nine of historys most notorious rulers, from the Roman emperor Caligula to the North Korean Communist dictator Kim Jong-il. Rank paints intimate portraits of these deeply flawed but powerful men, examining the role that madness played in their lives, the repercussions of their madness on history, and what their madness can tell us about the times in which they lived. In Historys 9 Most Insane Rulers, you will meet: King Charles VI of France, who thought he was made of glass Sultan Ibrahim I, who was driven mad by the sadistic succession battles of the Ottoman Empire Caligula, who built temples to himself and whose reign highlighted the lethal tensions between the power of the new Imperial Rome and the prerogatives of the old Roman Republic The Russian tsar who became known as Ivan the Terrible King George III of Britain, who not only lost his American colonies, but lost his mind as well Bavarias Mad King Ludwig II, who left the world richer for his fabulous fairy tale castles and his patronage of the composer Richard Wagner Insane rulers did not die off with the last of the mad monarchs who inherited their power. Rank also examines the rise to power of crazed modern rulers, such as Idi Amin, who began as a lowly army cook and rose to the presidency of Uganda, and Saparmurat Niyazov, who ruled Turkmenistan and promoted a bizarre cult of personality around himself. Both entertaining and illuminating, Historys 9 Most Insane Rulers is a must-read for anyone interested in the role insanity has played in history