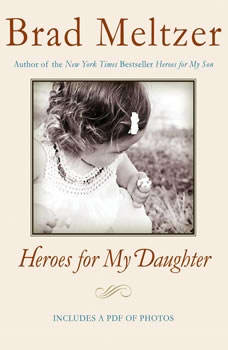 Heroes for My Daughter

Families can learn together what makes a fulfilling and impactful life from this inspiring collection of heroes. In Heroes for MyDaughter, the New York Times bestselling author Brad Meltzer brings together the stories of fifty-five remarkable people, a diverse set of individuals from across time and from all walks of life: artists and inventors, scientists and explorers, who each dedicated their life to making our world a better place. From Eleanor Roosevelt to Amelia Earhart, Anne Frank to Randy Pausch, Theodore Roosevelt to Lucille Ball, Rosa Parks to the passengers on United Flight 93, the lives of these men and women offer lessons to guide our daughters on their journey to adulthood-lessons sure to inspire them as they take their place as citizens in our society and in the world. The stories told in Heroes for My Daughter are perfect for families to listen to and treasure together.

Pediatrician and bestselling author Meg Meeker has a message: Stop undervaluing fatherhood. We live in a culture that hails motherhood as a womans crowning achievement yet defines men first and foremost by their professional accomplishments, treati...

From the New York Times best-selling author of Have a New Kid by Friday comes a call to dads to step up to the plate to become the loving, actively engaged father that a daughter needs for life and relational success. The relationship that matt...

This book is driven by the Holy Spirit and used as guidance for fathers, mentors, pastors, and siblings. The foundation of the man that I have become could not have been built without my beautiful wife who stands by me through the journeys o...

We're in the midst of a parenting climate that feeds on "more": more expert advice, more gear, more fear about competition and safety, and more choices to make about education, nutrition, even entertainment. The result? Overwhelmed, confused parents...

Congrats: You’re going to be a dad! Now what? Dude, relax; you’re going to be fine. But it wouldn’t hurt to get a few pointers—a road map of what lies ahead. That’s what this book is for. From Dude to Dad gives you the...

For too long, we've thought of fathers as little more than sources of authority and economic stability in the lives of their children. Yet cutting-edge studies drawing unexpected links between fathers and children are forcing us to reconsider our as...

What to Expect When Your Wife is Expanding: A Reassuring Month-by-Month Guide for the Father-to-Be, Whether He Wants Advice or Not
by Thomas Hill