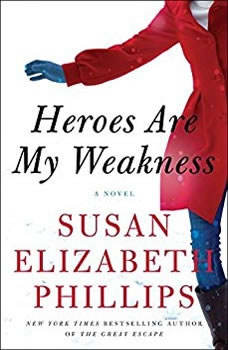 Heroes Are My Weakness

He's a reclusive writer whose imagination creates chilling horror novels. She's a down-on-her-luck actress reduced to staging kids' puppet shows.Annie Hewitt has arrived on Peregrine Island in the middle of a snowstorm and at the end of her resources. She's broke, dispirited, but not quite ready to give up. Her red suitcases hold the puppets she uses to make her living, the romantic novels she loves, and a little bit of courage—all she has left.Annie couldn't be more ill prepared for what she finds when she reaches Moonraker Cottage or for the man who dwells in Harp House, the mysterious mansion that hovers above the cottage from a windblown cliff. When she was a teenager, he betrayed her in a way she can never forget or forgive. Now they're trapped together on a frozen island along with a lonely widow, a mute little girl, and townspeople who don't know how to mind their own business. Is he the villain she remembers or has he changed? Her head says no. Her heart says yes. It's going to be a long, hot winter.