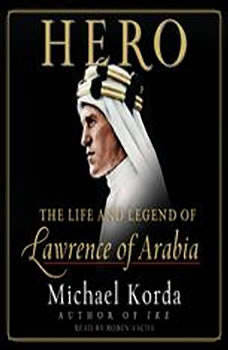 Hero: The Life and Legend of Lawrence of Arabia

From Michael Korda, author of the New York Times bestselling Eisenhower biography Ike and the captivating Battle of Britain book With Wings Like Eagles, comes the critically-acclaimed definitive biography of T. E. Lawrence—the legendary British soldier, strategist, scholar, and adventurer whose exploits as “Lawrence of Arabia” created a legacy of mythic proportions in his own lifetime. Many know T.E. Lawrence from David Lean’s Oscar-winning 1962 biopic—based, itself, upon Lawrence’s autobiographical Seven Pillars of Wisdom—but in the tradition of modern biographers like John Meacham, David McCullough, and Barbara Leaming, Michael Korda’s penetrating new examination reveals new depth and character in the twentieth century’s quintessential English hero.