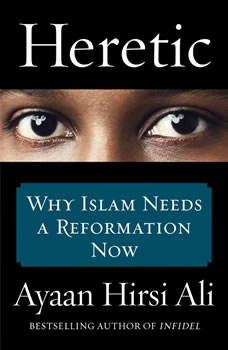 Continuing her very personal journey from a deeply religious Islamic upbringing to a post at Harvard, the brilliant, charismatic and controversial New York Times and Globe and Mail #1 bestselling author of Infidel and Nomad makes a powerful plea for an Islamic Reformation as the only way to end the horrors of terrorism and sectarian warfare and the repression of women and minorities.Today, the world’s 1.6 billion Muslims can be divided into a minority of fundamentalists, a majority of observant “daily” Muslims and a few dissidents who risk their lives by questioning their own religion. But there is only one Islam and, as Ayaan Hirsi Ali argues, there is no denying that some of its key teachings—like the subordination of women and the duty to wage holy war—are incompatible with the values of a free society. For centuries it has seemed as if Islam is immune to change. But Hirsi Ali has come to believe that a “Reformation”—a revision of Islamic doctrine aimed at reconciling the religion with modernity—is now at hand, and may even have begun. The Arab Spring may now seem like a political failure. But its challenge to traditional authority revealed a new readiness—not least by Muslim women—to think freely and to speak out.Ayaan Hirsi Ali argues that ordinary Muslims throughout the world want change. Courageously challenging the fundamentalists, she identifies five key amendments to Islamic doctrine that must be made in order to set Muslims free from their 7th-century chains. Interweaving her own experiences, historical analogies and powerful examples from contemporary Islamic societies and cultures, Heretic is not a call to arms, but a passionate plea for peaceful change and a new era of toleration.

The Life of Mohammed
by Bill Warner, PhD

The Search for Inner Peace
by Bilal Philips

A Battle for the Soul of Islam
by Dr. M. Zuhdi Jasser

The Hadith
by Bill Warner, PhD