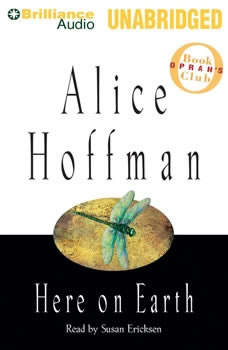 March Murray, along with her fifteen-year-old daughter, Gwen, returns to the small Massachusetts town where she grew up to attend the funeral of Judith Dale, the beloved housekeeper who raised her. After nearly twenty years of living in California, March is thrust into the world of her past. She finds that Mrs. Dale knew more of life than March could have ever suspected; that her brother Alan, whose tragic history has left him grief-stricken, has turned to alcohol as his only solace; and that Hollis, the boy she once loved, is the man she can't seem to stay away from. Here on Earth is the dramatic and lyrical account of the joys of love, as well as the destruction that love can release. Erotic, disturbing, and compelling, this is without a doubt Alice Hoffman's most unforgettable novel. "[Hoffman is] a dreamy and mesmerizing storyteller." - The New Yorker

Black and Blue
by Anna Quindlen

Writing with the depth and insight that have become her signature, Pulitzer Prize-winning author Anna Quindlen explores a passionate marriage that turns into a nightmare. This Oprah’s Book Club selection, destined to become as successful a bes...