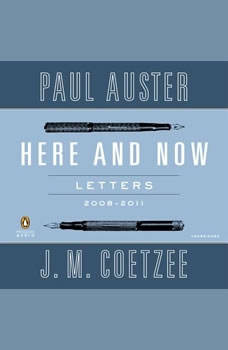 Although Paul Auster and J. M. Coetzee had been reading each other’s books for years, the two writers did not meet until February 2008. Not long after, Auster received a letter from Coetzee, suggesting they begin exchanging letters on a regular basis and, “God willing, strike sparks off each other.”

Here and Now is the result of that proposal: the epistolary dialogue between two great writers who became great friends. Over three years their letters touched on nearly every subject, from sports to fatherhood, film festivals to incest, philosophy to politics, from the financial crisis to art, death, family, marriage, friendship, and love.

Their correspondence offers an intimate and often amusing portrait of these two men as they explore the complexities of the here and now and is a reflection of two sharp intellects whose pleasure in each other’s friendship is apparent on every page.