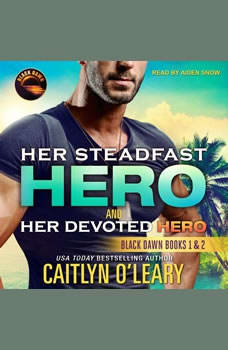 Her Steadfast HERO & Her Devoted HERO

Her Steadfast Hero (Book 1) When the hospital is overrun by the most brutal of convicts that escaped during the earthquake, and an American doctor is held for ransom, the Navy SEAL unit Black Dawn is called in. Can David Sloane and Black Dawn rescue Dr. Carys Adams before it is too late? Through all the turmoil will David and Sarah realize that their time has finally come, and they were meant to be together? Her Devoted Hero (Book 2) When one of her co-workers is murdered and it looks like Kenna might be the next one in the killer's crosshairs, Dex is determined to keep her safe. But with a target on her back, it's really hard to keep a shield over her heart.