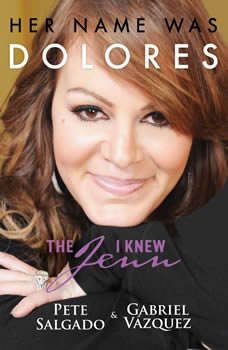 Her Name Was Dolores: The Jenn I Knew

The untold story of the iconic Jenni Rivera through the perspective of her former managers, Pete Salgado and Gabriel Vazquez and it will be the basis for a TV series that will air on Univision. This book will take us into the boiler room and offer a behind-the-scenes look into the strategies and moments that lead to national headlines. Pete Salgado was Jenn’s longstanding manager, considered by Jenn her fifth bother, he worked with her for nearly a decade, and helped negotiate many of her deals. She shared things with him she did not with others, and he came to know her in ways no one else did. The months before Jenni’s death were filled with betrayals and disappointments from those she most loved and trusted. Salgado addresses that and takes readers deep inside some cryptic tweets Jenni posted as well of answering very difficult questions such as: Did Chiquis have an affair with Jenni’s husband, Esteban? Who really was the person Jenni called El PelA³n and tweeted about, and what did he mean to her? Was Jenni embroiled with the drug cartel? Did the notorious narco El Barbie mistreat her? Was she going to buy a plane? Was Jenni’s death truly an accident? This book describes everything that went into that final moment, and for the first time, truly depict the beauty, love, complexity, and pain of Jenni’s relationship with Chiquis – which was much different and went much deeper than a traditional mother-daughter relationship. Salgado shares who Dolores really was that her fans did not know and did not see on stage… Salgado and Vasquez give readers a better perspective of the life of the “Diva de la banda” from the two people most deeply involved in helping build her career, and who knew her in ways that no one else did.