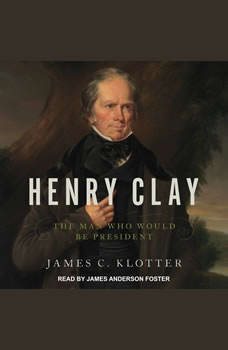 Henry Clay: The Man Who Would Be President

Charismatic, charming, and one of the best orators of his era, Henry Clay seemed to have it all. He offered a comprehensive plan of change for America, and he directed national affairs as Speaker of the House, as Secretary of State to John Quincy Adams—the man he put in office—and as acknowledged leader of the Whig party. As the broker of the Missouri Compromise and the Compromise of 1850, Henry Clay fought to keep a young nation united when westward expansion and slavery threatened to tear it apart. Yet, despite his talent and achievements, Henry Clay never became president. Three times he received Electoral College votes, twice more he sought his party's nomination, yet each time he was defeated. Alongside fellow senatorial greats Daniel Webster and John C. Calhoun, Clay was in the mix almost every moment from 1824 to 1848. Given his prominence, perhaps the years should be termed not the Jacksonian Era but rather the Age of Clay. James C. Klotter uses new research and offers a more focused, nuanced explanation of Clay's programs and politics in order to answer the question of why the man they called "The Great Rejected" never won the presidency but did win the accolades of history.