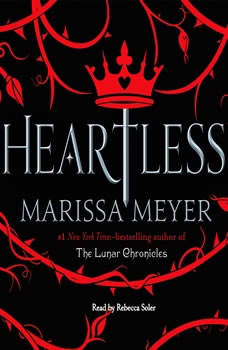 Rebecca Soler, narrator of Marissa Meyer's The Lunar Chronicles, returns to narrate this program.“Narrator Rebecca Soler delivers a take-no-prisoners performance for the third title in The Lunar Chronicles. Her instinctive delivery of Meyer's humor makes the story an addictive listen. Series fans and new listeners will be equally entranced.” —AudioFile Magazine on Cress Long before she was the terror of Wonderland—the infamous Queen of Hearts—she was just a girl who wanted to fall in love.Long before she was the terror of Wonderland, she was just a girl who wanted to fall in love. Catherine may be one of the most desired girls in Wonderland, and a favorite of the unmarried King of Hearts, but her interests lie elsewhere. A talented baker, all she wants is to open a shop with her best friend. But according to her mother, such a goal is unthinkable for the young woman who could be the next queen. Then Cath meets Jest, the handsome and mysterious court joker. For the first time, she feels the pull of true attraction. At the risk of offending the king and infuriating her parents, she and Jest enter into an intense, secret courtship. Cath is determined to define her own destiny and fall in love on her terms. But in a land thriving with magic, madness, and monsters, fate has other plans.In Heartless, Marissa Meyer's stand-alone novel, the New York Times-bestselling author dazzles us with a prequel to Alice's Adventures in Wonderland.

The #1 New York Times Bestselling Series!Mirror, mirror on the wall,Who is the fairest of them all? Fans of the Lunar Chronicles know Queen Levana as a ruler who uses her "glamour" to gain power. But long before she crossed paths with Cinder, Scarle...

The Noble Servant
by Melanie Dickerson

New York Times bestselling author Melanie Dickerson beautifully re-imagines “The Goose Girl” by the Brothers Grimm into a medieval tale of adventure, loss, and love.“When it comes to happily-ever-afters, Melanie Dickerson is the un...

The #1 New York Times Bestselling Series!Princess Winter is admired by the Lunar people for her grace and kindness, and despite the scars that mar her face, her beauty is said to be even more breathtaking than that of her stepmother, Queen Levana. W...

Rose is the youngest of seven children, meant to replace her dead sister. Maybe because of that, she’s never really fit in. She’s always felt different, out of place, a restless wanderer in a family of homebodies. So when an enormous whi...

The #1 New York Times Bestselling Series!A wicked mash-up of fairy tale and Terminator—set in a Star Wars kind of world—Marissa Meyer's Cinder is a fresh and fiercely ingenious futuristic retelling of CinderellaHumans and androids crowd ...

The #1 New York Times Bestselling Series!In this third book in Marissa Meyer's bestselling Lunar Chronicles series, Cinder and Captain Thorne are fugitives on the run, now with Scarlet and Wolf in tow. Together, they're plotting to overthrow Queen L...

Before Peter Pan belonged to Wendy, he belonged to the girl with the crow feather in her hair. . . . Fifteen-year-old Tiger Lily doesn't believe in love stories or happy endings. Then she meets the alluring teenage Peter Pan in the forbidden woods o...