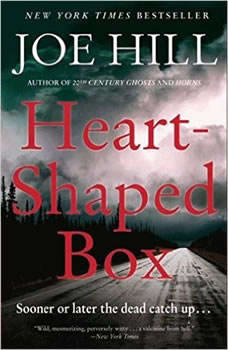 “Wild, mesmerizing, perversely witty….A Valentine from hell.” —Janet Maslin, New York Times The publication of Joe Hill’s beautifully textured, deliciously scary debut novel Heart-Shaped Box was greeted with the sort of overwhelming critical acclaim that is rare for a work of skin-crawling supernatural terror. It was cited as a Best Book of the Year by Atlanta magazine, the Tampa Tribune, the St. Louis Post Dispatch, and the Village Voice, to name but a few. Award-winning, #1 New York Times bestselling Neil Gaiman of The Sandman, The Graveyard Book, and Anansi Boys fame calls Joe Hill’s story of a jaded rock star haunted by a ghost he purchased on the internet, “relentless, gripping, powerful.” Open this Heart-Shaped Box from two-time Bram Stoker Award-winner Hill if you dare and see what all the well-deserved hoopla is about.

Loved, loved, loved this book! Really a great story and wonderful character development. At the begining, I found myself really disliking Judas Coyne, but by the end of the book I was a big fan. I particularly enjoyed this writer's style--descriptive, but not overly so, yet able to paint vivid images in the readers' mind. This book had me on the edge of my seat and completely drew me in. Would love to see this made into a movie...

I found the description of the book more interesting than the book itself.

Had a hard time staying interested. Half way thru, I just put in the last CD so I could see how it ended. Glad I didn't waste more time listening to the whole think.

Didn't even finish the book...no interest.