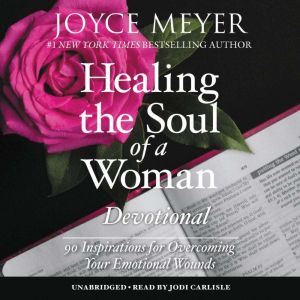 Healing the Soul of a Woman Devotional: 90 Inspirations for Overcoming Your Emotional Wounds

Receive healing for your emotional wounds and discover your destiny as God's daughter with this 90-day devotional by internationally renowned Bible teacher Joyce Meyer.Healing the Soul of a Woman delved deeply into Joyce Meyer's personal story and the journey of healing for all women. Despite suffering from years of abuse, abandonment, and betrayal by those closest to her, Joyce firmly believes a woman who has been deeply hurt by life's circumstances can be healed, heart and soul. Her steadfast claim comes from living her own journey of soul healing, and from seeing so many women who don't believe they can fully overcome their pain--or even know where to begin--find the guidance they need in the life-changing wisdom of the Bible. Now, in this companion devotional, Joyce will guide you through 90 daily readings to encourage you through whatever obstacles may be holding you back from finding your true destiny. God can heal your pain, and He wants to do this in you. Let HEALING THE SOUL OF A WOMAN DEVOTIONAL be an inspiration in your journey toward the wonderful, joyful future God has planned for you.