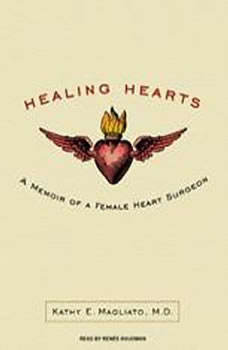 Healing Hearts: A Memoir of a Female Heart Surgeon

Dr. Kathy Magliato is one of fewer than a dozen female heart surgeons practicing in the world today. She is also a member of an even more exclusive group—those surgeons who perform heart transplants. Healing Hearts is the story of the making of a surgeon who also calls herself a wife and mother. Dr. Magliato takes us into her highly demanding, physically intense, male-dominated world and shows us how she masterfully works to save patients' lives every day. In her memoir we come to know many of those patients whose lives Dr. Magliato has touched: a baby born with a hole in her heart, a ninety-four-year-old woman with heart failure, and a thirty-five-year-old movie producer who saves her own life by recognizing the symptoms of a heart attack. Along the way, Dr. Magliato sheds light on the rarely recognized symptoms of heart attack and cardiovascular disease—the number-one killer of women in America—and the specific measures that can be taken to prevent it. By taking us deep into her life and those of her patients, Dr. Magliato acquaints us with the day-to-day realities of her life and work. We see her frantically juggle a full and happy family life as the wife of a liver transplant surgeon (they each have bedside tables cluttered with pagers and cell-phones) and the mother of two young boys. We also see the toll that being a female pioneer can take, as well as the rewards of such demanding work. Dr. Magliato's powerful and moving memoir demonstrates her love, passion, and commitment toward both her work and her family and reveals that, at the end of a long day, it's the heart that matters most.