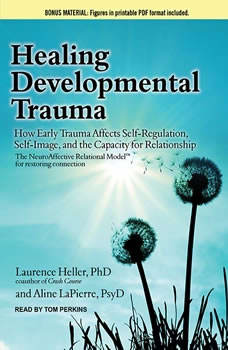 Explaining that an impaired capacity for connection to self and to others underlies most psychological and many physiological problems, clinicians Laurence Heller, PhD, and Aline LaPierre, PsyD, introduce the NeuroAffective Relational Model™ (NARM), a unified approach to developmental, attachment, and shock trauma that emphasizes working in the present moment. NARM is a somatically based psychotherapy that helps bring into awareness the parts of self that are disorganized and dysfunctional without making the regressed, dysfunctional elements the primary theme of the therapy. It emphasizes a person's strengths, capacities, resources, and resiliency and is a powerful tool for working with both nervous system regulation and distortions of identity such as low self-esteem, shame, and chronic self-judgment.

From the Pulitzer Prize-winning, bestselling author of The Emperor of All Maladies—a magnificent history of the gene and a response to the defining question of the future: What becomes of being human when we learn to “read” and ...

From 1990 to 1995, Dr. Rick Strassman conducted U.S. government–approved and funded clinical research at the University of New Mexico in which he injected sixty volunteers with DMT, one of the most powerful psychedelics known. His detailed acc...

The 1964 murder of a nationally known cancer researcher sets the stage for this gripping exposé of medical professionals enmeshed in covert government operations over the course of three decades. Following a...

The struggle to perform well is universal: each one of us faces fatigue, limited resources, and imperfect abilities in whatever we do. But nowhere is this drive to do better more important than in medicine, where lives are on the line with every dec...

The New York Times bestselling author of Better and Complications reveals the surprising power of the ordinary checklist We live in a world of great and increasing complexity, where even the most expert professionals struggle to master the tasks the...

An American Sickness
by Elisabeth Rosenthal

A New York Times bestseller/Washington Post Notable Book of 2017/NPR Best Books of 2017/Wall Street Journal Best Books of 2017 "This book will serve as the definitive guide to the past and future of health care in America.”—Sid...

For two hundred years a noble Venetian family has suffered from an inherited disease that strikes their members in middle age, stealing their sleep, eating holes in their brains, and ending their lives in a matter of months. In Papua New Guinea, a p...

The Nurses
by Alexandra Robbins

Nursing is more than a career; it's a calling, and one of the most important fascinating, and dangerous professions in the world. As the frontline responders battling traumas, illnesses, and aggression from surprising sources, nurses are remarkable...

Conventional health care is no longer working in your favor?but thankfully, Dr. Davis is. In his New York Times bestseller Wheat Belly, Dr. William Davis changed the lives of millions of people by teaching them to remove grains from their diets to ...