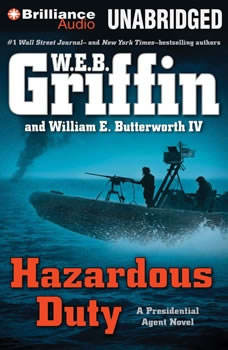 The Presidential Agent adventures return in the most harrowing novel yet in the #1 New York Times bestselling series.Mexican drug cartels are shooting up the streets of Laredo and El Paso. Somali pirates are holding three U.S. tankers for ransom. The President is fed up and has what he thinks is a pretty bright idea—to get hold of Colonel Charley Castillo and his merry band and put them on the case. Unfortunately, that will be difficult. Everybody knows that the President hates Castillo’s guts, has just had him forcibly retired from the military, and now Castillo’s men are scattered far and wide, many of them in hiding. There are also whispers that the President himself is unstable—the word “nutcake” has been mentioned.How will it all play out? No one knows for sure, but for Castillo and company, only one thing is definite: It will be hazardous duty.