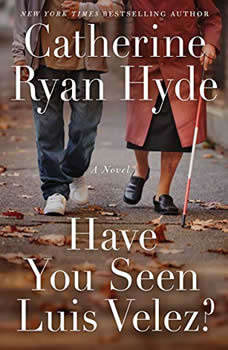 Have You Seen Luis Velez?

From New York Times bestselling author Catherine Ryan Hyde comes a moving novel about two strangers who find that kindness is a powerful antidote to fear.Raymond Jaffe feels like he doesn’t belong. Not with his mother’s new family. Not as a weekend guest with his father and his father’s wife. Not at school, where he’s an outcast. After his best friend moves away, Raymond has only two real connections: to the feral cat he’s tamed and to a blind ninety-two-year-old woman in his building who’s introduced herself with a curious question: Have you seen Luis Velez?Mildred Gutermann, a German Jew who narrowly escaped the Holocaust, has been alone since her caretaker disappeared. She turns to Raymond for help, and as he tries to track Luis down, a deep and unexpected friendship blossoms between the two.Despondent at the loss of Luis, Mildred isolates herself further from a neighborhood devolving into bigotry and fear. Determined not to let her give up, Raymond helps her see that for every terrible act the world delivers, there is a mirror image of deep kindness, and Mildred helps Raymond see that there’s hope if you have someone to hold on to.

Pay It Forward is a wondrous and moving story about Trevor McKinney, a twelve-year-old boy in a small California town who accepts the challenge that his teacher gives his class, a chance to earn extra credit by coming up with a plan to change the wo...

Pay It Forward is a wondrous and moving story about Trevor McKinney, a twelve-year-old boy in a small California town who accepts the challenge that his teacher gives his class, a chance to earn extra credit by coming up with a plan to change the wo...

In The Naked Soul of Iceberg Slim, the fierce and lyrical icon for criminal reformation describes himself as illfrom Americas fake faade of justice and democracy. For Iceberg Slim, the illness may have been a detriment, but for us its a gift. His ta...

An inspiring collection of essays by black women writers, curated by the founder of the popular book club Well-Read Black Girl, on the importance of recognizing ourselves in literature. Remember that moment when you first encountered a character who...

In this collection, African American leaders change history with the power of the spoken word. Martin Luther King, Jr.: I’ve Been to the Mountaintop (1968), Unfulfilled Dreams (1968) US Representative Barbara Jordan: DNC Keynote Address ...

Notes of a Native Son
by James Baldwin

At last, a new audio edition of the book many have called James Baldwins most influential work! Written during the 1940s and early 1950s, when Baldwin was only in his twenties, the essays collected in Notes of a Native Son capture a view of black l...