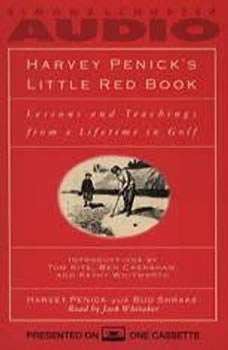 Harvey Penick's life in golf began when he was eight years old, caddying at the Austin, Texas, Country Club. Eight decades later, he is still there, dispensing wisdom to pros and beginners alike. His stature in the golf world is reflected in the wide array of champions that he has worked with including those featured on this audio program, and it is not for nothing that the Teacher of the Year Award given by the Golf Teachers Association is called the Harvey Penick Award.Now after sixty years of keeping notes on the things he's seen and learned and on the golfing greats he's taught, Penick is finally letting the secrets in his Little Red Book be heard by the golf world. His simple, direct, practical wisdom pares away all the hypertechnical jargon that's grown up around the game, and lets all golfers play their best---whatever their level.Already a classic in hardcover, the audio adaptation of Harvey Penick's Little Red Book will be a constant source of guidance and inspiration to anyone who has ever stepped up to the first tee.