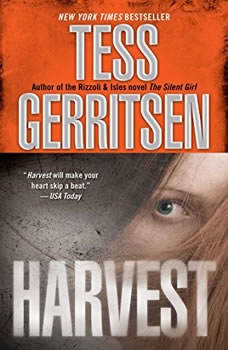 In Harvest, the book that introduced us to Tess Gerritsen's unique blend of medical expertise, harrowing suspense, and brilliantly crafted plot twists, the dark side of medical research is exposed. Harvest vividly portrays a young woman doctor challenging a world where medical miracles and greed fuel a lethal conspiracy -- and the bright lights of the O.R. conceal the ultimate corruption of genius.

The Cold Moon
by Jeffery Deaver

Lincoln Rhyme returns in a heart stopping new thriller from the author of The Twelfth Card On a freezing December night, with a full moon hovering in the black sky over New York City, two people are brutally murdered -- the death scenes marked b...

tess is like the new robin cook. they even come from the same city, boston. i like reading her books, especially now, because although i dont miss boston, its cool to say yes that street i always was there or oh i lived there or whatever. the actual story is about selling harvested organs (read this while i watched that on nip tuck!) and the people and plot were great. cant wait to read more of her books.