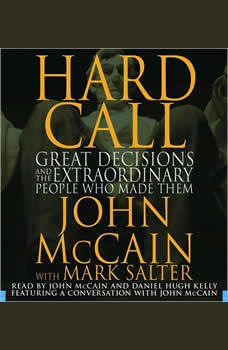 Hard Call: Great Decisions and the Extraordinary People Who Made Them

America's most inspiring politician pays tribute to men and woman who have exhibited composure, wisdom and intellect in the face of tough decisions. John McCain draws from experiences of both extraordinary people and people in extraordinary circumstances, culling lessons about the process and nature of judicious and effective decision-making.Acclaimed authors John McCain and Mark Salter describe the anatomy of great decisions in history by telling the remarkable stories of men and women who have exemplified composure, wisdom, and intellect in the face of life's toughest decisions. They identify six qualities typically represented in the best decisions: Awareness. Timing. Foresight. Confidence. Humility. Inspiration. These qualities are personified by the exceptional individuals in this book, each of whom made a hard call, including:Henry Ford's decision to sacrifice his company's competitive edge by reducing the work day and guaranteeing a minimum wage;Branch Rickey's decision to offer Jackie Robinson a contract to play for the Brooklyn Dodgers in the face of public opposition;Ellen Johnson-Sirleaf 's decision to return to wartorn Liberia after receiving an economics degree from Harvard;General Fred Weyand's decision to redeploy fifteen of his battalions despite resistance from senior American military commanders in Vietnam.Woven into these stories are John McCain's own views on the process and art of decision-making and examples of the hard calls we face in our lives. "When I assess a decision," McCain writes, "I want to know all I can about the character of the decision maker before I examine the properties of the decision, its outcome or how it was arrived at." Hard Call is a testament to the people whose choices serve as a beacon for us all.