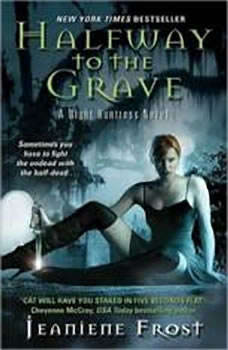 Halfway to the Grave

Halfvampire Catherine Crawfield is going after the undead with a vengeance, hoping that one of these deadbeats is her fatherthe one responsible for ruining her mother's life. Then she's captured by Bones, a vampire bounty hunter, and is forced into an unlikely partnership. In exchange for help finding her father, Cat agrees to train with the sexy night stalker until her battle reflexes are as sharp as his fangs. She's amazed she doesn't end up as his dinnerare there actually good vampires? Pretty soon, Bones will have her convinced that being halfdead doesn't have to be all bad. But before she can enjoy her status as kickass demon hunter, Cat and Bones are pursued by a group of killers. Now Cat will have to choose a side...and Bones is turning out to be as tempting as any man with a heartbeat.

At Grave's End
by Jeaniene Frost

Some things wont stay buried at graves end.It should be the best time of halfvampire Cat Crawfields life. With her undead lover Bones at her side, shes successfully protected mortals from the rogue undead. But though Cats worn disguise after disgui...

Manolito De La Cruz knew he was dangerously close to turning into a vampire. The last thing he expected after being called back to his Carpathian homeland by Prince Mikhail was to catch the scent of his destined lifemate in MaryAnn Delaney. MaryAnn ...

No Mercy
by Sherrilyn Kenyon

Live fast, fight hard and if you have to die then take as many of your enemies with you as you can. That is the Amazon credo and it was one Samia lived and died by. Now in contemporary New Orleans, the immortal Amazon warrior is about to learn that ...

Born of Shadows
by Sherrilyn Kenyon

In a world where the League and its assassins rule, where betrayal and treachery are everywhere . . . the only survivors are those ones who are . . . BORN OF SHADOWSFor Caillen Dagan, a defiant soldier of fortune, survival isn't a right, it's a bru...

Born of Silence
by Sherrilyn Kenyon

In a universe where corruption and deception rule all aspects of life, sparks of rebellion threaten to ignite . . . BORN OF SILENCE As the Resistance leader, Zarya Starska's only goal is to topple the government that destroyed her entire family an...

This book is amazing, funny, sexy and a must read. There isn't alot of sex, two scenes and the rest fade into other scenes. I was surprised by this book how the story was told so real. In most fantasy there inst love until the next books, this one delivers and it's very sweet with many twists. I cant wait for the second book.

I am shocked by the other review saying this book is all vamp sex and implying it is soft porn...I could understand that if it was a review of one of Laurell K. Hamilton's later books but this is a far cry from them. I thought it was witty and a well told tale that held my interest and excited me about this new series in such a crowded genre. There is some romance and a couple of very mild sex scenes that fade out and are very short nothing like Hamiltons 100 page long boring monotonous pointless sex scenes. Anyway, I just wanted to clear this book of a bad review. It is a fun read and if you like this genre I think you will really enjoy this promising new series.

What a great start to a series ! The writing is well done. The characters have depth, are flawed and likeable. The love story is hot and believable and there is a good balance of sex and adventure. This is exactly what I like to read in the paranormal romance/ urban fantasy genre.