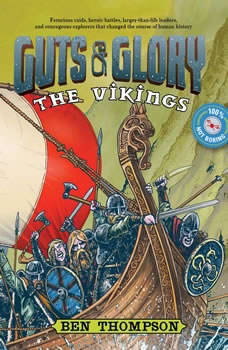 History comes alive for kids like no textbook can in this epic account of the time of the Vikings that's perfect for history buffs and reluctant readers! Contains awesome illustrations!From battle-axe-wielding tribes plundering the greatest cities of Europe to powerful kings and queens ruling their dominions with iron fists, the Vikings were some of the most feared and fearless figures in European history. Find the bravest heroes, the most menacing villains, and unbelievably awesome facts and myths inside this action-packed overview that will amaze kids with tales of a people so incredible...it's hard to believe they were real.History buff and popular blogger Ben Thompson's lively storytelling style brings the Vikings back to life in this second book in the exhilarating Guts & Glory series!

The Jolly Sailor
by Lucy Simister

The Jolly Sailor is a fast paced comedy pirate adventure involving five friends. The story revolves around William who is shy and studious, and he didn't know he had a past and that past was about to catch up with him! He never knew that his mothe...

At the outset of World War II, Denmark did not resist German occupation. Deeply ashamed of his nations leaders, fifteen-year-old Knud Pedersen resolved with his brother and a handful of schoolmates to take action against the Nazis if the adults woul...