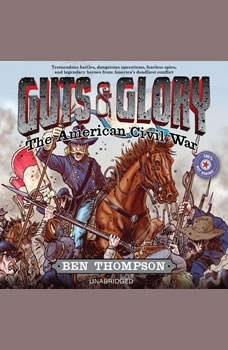 History comes alive for kids like no textbook can in this epic account of the American Civil War that's perfect for history buffs and reluctant readers! Contains awesome illustrations!From courageous cavalry rides deep into enemy territory to harrowing covert missions undertaken by spies and soldiers, the events of the American Civil War were filled with daring figures and amazing feats. This exhilarating overview covers the biggest battles as well as captivating lesser-known moments to entertain kids with unbelievable (and totally true) tales of one of America's most fascinating conflicts.History buff, Civil War reenactor, and popular blogger Ben Thompson uses his extensive knowledge and vivid storytelling style to bring the Civil War to life in this first book in a thrilling new series featuring incredible people, events, and civilizations. Get ready to learn just how awesome history can be!

Unstoppable true stories of the most hardcore showdowns, last stands, and military engagements of all time! When only one can live, it's an Ultimate Deathmatch!This ain't no table tennis. You're not here to skip rope with your niece. Yo...

Now available in paperback, this fourth book in the action-packed Guts & Glory series takes readers through the exciting and fascinating history of the American Revolution. Perfect for history buffs, reluctant readers, and fans of Hamilton!From Geo...

Under the Freedom Tree
by Susan VanHecke

Taut free verse tells the little-known story of the first contraband camp of the Civil War--seen by some historians as the "beginning of the end of slavery in America." One night in 1861, three escaped slaves made their way from the Confederate line...

Battle of Gettysburg, The
by Clara MacCarald