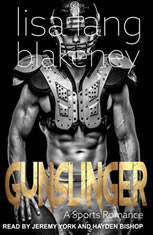 Gunslinger: A quarterback who throws deep risky passes on the field and off . . . I hate sports, and he is football royalty. I like quiet and predictable, but he's sex and swagger personified. I didn't particularly care for Saint Stevenson the first moment I laid eyes on him, but his warped brain seemed to process our initial meeting as foreplay. I have a meticulous five year plan in place for myself and my career, but now this huge, cocky, self-absorbed quarterback who I've been assigned to at work is seriously f*cking it up. He's the ultimate player on and off the field, and it doesn't make any sense that I'm falling hard and fast for the arrogant baller; but there doesn't seem to be anything about our love story that makes any sense at all. Contains mature themes.