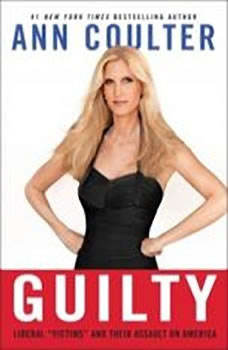 Guilty: Liberal "Victims" and Their Assault on America

Ann Coulter’s many dedicated fans are eagerly anticipating this all new, completely original audiobook, which follows her 6th bestseller, If Democrats Had Any Brains, They’d All Be Republicans. Not one to shy away from controversy, Ann Coulter once again brings her no-holds-barred approach to the current state of politics and culture, and in this highly charged election year, her take on issues is certain to attract major attention from across the political spectrum. Always entertaining, Coulter is one of the most talked about figures in America today. Love her or hate her, you can’t ignore her.

"You know those pundits who bore you to tears trying to balance everyone's point of view? Coulter isn't one."–People