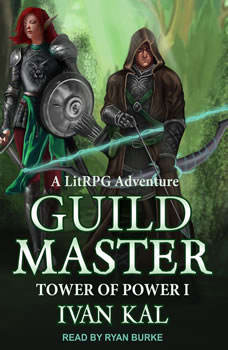 Morgan used to be a pretty normal guy. He went to college by day and played online games by night, leading his guild into new conquests—until he got hit by a car, and a dude wearing a wetsuit appeared in front of him. The man offered him a new chance at life in a world that he had created, a world with similar rules to the games that Morgan loved to play. There is the promise of great rewards and power, he says, if Morgan manages to complete the Tower of Power. Stupid name, I know. Morgan didn't usually trust strangers who seem to have god complexes, but he was in a pinch. There's a crazy-looking dude saying that he is technically not a god on one end of the tunnel, and a blinding light on the other end—and he was really not digging the light. So he accepted the offer from the surfer god-not-god. Getting dropped into a strange new world with no idea what the rules are was not something that Morgan was a fan of; and in this strange world, it seems like everything is out to eat his face. It was a good thing, then, that he stumbled onto two half-elf twins willing to help him get the hang of this strange new world. Now, all he needs to do is survive long enough to reach this Tower.