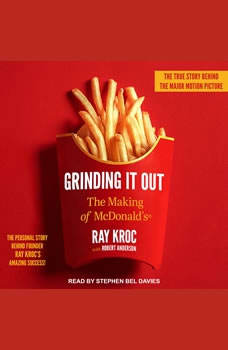 Grinding It Out: The Making of McDonald's

Few entrepreneurs can claim to have radically changed the way we live, and Ray Kroc is one of them. His revolutions in food-service automation, franchising, shared national training, and advertising have earned him a place beside the men and women who have founded not only businesses, but entire empires. But even more interesting than Ray Kroc the business man is Ray Kroc the man. Not your typical self-made tycoon, Kroc was fifty-two years old when he opened his first franchise. In Grinding It Out, you'll meet the man behind McDonald's, one of the largest fast-food corporations in the world with over 32,000 stores around the globe. An irrepressible enthusiast, intuitive people person, and born storyteller, Kroc will fascinate and inspire you.

The traits that make Sam Zell one of the world’s most successful entrepreneurs also make him one of the most surprising, enigmatic, and entertaining mavericks in American business.   Self-made billionaire Sam Zell consistently sees what ...