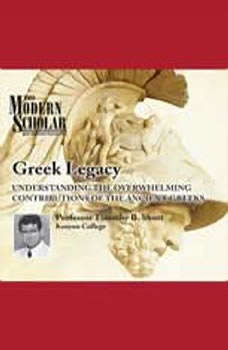 Greek Legacy: Understanding the Overwhelming Contributions of the Ancient Greeks

Named one of the Best 300 Professors by the Princeton Review, Timothy B. Shutt has been repeatedly honored for his exceptional skills as a lecturer. In Greek Legacy, Professor Shutt explores the qualities that set the ancient Greeks apart from other ancient civilizations. The Greeks, more than any other culture, contributed to the formation of our own cultural system. These lectures show how that society developed, what it consisted of, and how it continues to impact the modern world.

The King of Infinite Space
by David Berlinski

Geometry defines the world around us, helping us make sense of everything from architecture to military science to fashion. And for over two thousand years, geometry has been equated with Euclid's Elements, arguably the most influential book in the ...

The Greek Way
by Edith Hamilton

What the Greeks discovered, how they brought a new world to birth out of the dark confusions of an old world that had crumbled away, is full of meaning for us today who have seen an old world swept away. In The Greek Way, Edith Hamilton shares the ...

The Grand Strategy of Classical Sparta
by Paul A. Rahe

More than 2,500 years ago, a confederation of small Greek city-states defeated the invading armies of Persia, the most powerful empire in the world. In this meticulously researched study, historian Paul Rahe argues that Sparta was responsible for th...

Donald Kagan-Yale's Sterling Professor of Classics and History-delivers a compelling new look at revisionism in Thucydides' classic History of the Peloponnesian War. To determine how accurate and dispassionate the Athenian general really was, Kagan ...

In the fourth volume of the acclaimed Hinges of History series, Thomas Cahill brings his characteristic wit and style to a fascinating tour of ancient Greece. The Greeks invented everything from Western warfare to mystical prayer, from logic to stat...

In Sailing the Wine-Dark Sea, his fourth volume to explore “the hinges of history,” Thomas Cahill escorts the reader on another entertaining—and historically unassailable—journey through the landmarks of art and bloodshe...

Here are the thrills, grandeur, and unabashed fun of the Greek myths, stylishly retold by Stephen Fry. The legendary writer, actor, and comedian breathes life into ancient tales, from Pandora's box to Prometheus's fire, and transforms the adventure...

The Founders of the Western World
by Michael Grant

Through his in-depth analysis, Michael Grant introduces us to the political, military, cultural, social, economic, and religious life of the times that were the building blocks of what we now call the Western World. He creates a vivid panorama of th...

The Lost Empire of Atlantis
by Gavin Menzies

“Tremendous. This guy has done history like you would not believe.”—Glenn BeckThe secrets of history’s most enduring mystery are finally revealed in The Lost Empire of Atlantis. Through impeccable research and intelligent spe...