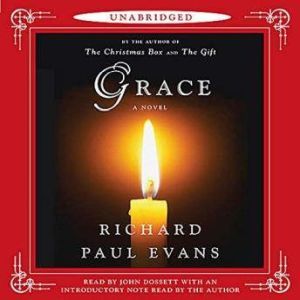 We Can Bury the Past, But It Never Really Dies Dear Listener, I am often asked where my stories come from. I'm not always sure. Sometimes a story just comes to me in waves (or trickles) of inspiration and oftentimes it's not until the very end of the book that I see where my characters are taking me. This is such a tale. Grace is the story of a young runaway girl and the boy who hides her from a frightening world too large and unfathomable for him to comprehend. It is also about two brothers and the love that binds them together through difficult times. In some ways this is the most autobiographical of all my novels. When I was eight years old my father lost his job, and we sold our home in beautiful and aptly named Arcadia, California, to move to a poor neighborhood in Utah and into a rundown home like the one I describe in the story. I have no fond memories of that time. Not one. I wanted to go home. I've found my home now, and it has nothing to do with the place where I live, and everything to do with the family I love. Sincerely, Richard Paul Evans

Grace is a beautiful story of a young man who helped a girl thru some of the most painful time in her life. If anyone who doesn't believe in what sexual abuse can do to people they need to read this book. I cried thru the last disc when we found out the ending because I could feel the pain that Grace went thru and also Eric who loved her and felt he betrayed her in the end. Eric thou took up this cause into his own life which there are not enough people who do this. Many sexual abusers are able to be free to abuse again and again. There isn't a day I don't relieve what happened to me years ago. If anyone knows or supects that a child is abused speak up for the child's sake. This is one crime that needs to be stopped. Julie