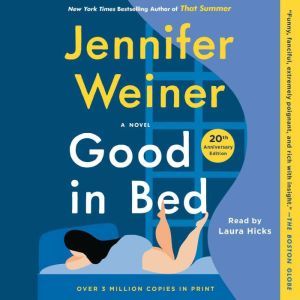 At first my eyes wouldn't make sense of the letters. Finally, they unscrambled. Loving a Larger Woman, said the headline, by Bruce Guberman. Bruce Guberman had been my boyfriend for just over three years, until we'd decided to take a break three months ago. And the larger woman, I could only assume, was me.Cannie Shapiro never wanted to be famous. The smart, sharp, plus-sized pop culture reporter was perfectly content writing about other people's lives on the pages of the Philadelphia Examiner. But the day she opens up a national women's magazine to find out that her ex-boyfriend has been chronicling their ex-sex life is the day her life changes forever.Loving a larger woman is an act of courage in our world, Bruce has written. And Cannie -- who never knew that Bruce saw her as a "larger woman," or thought that loving her was an act of courage -- is plunged into misery, and into the most amazing year of her life.Radiant with wit, bursting with surprises, and written with bite and bittersweet humor, Jennifer Weiner's deliciously readable debut novel reaches beyond Cannie's story and into the heart of every woman. Gut-level real and laugh-out-loud funny, Good in Bed celebrates the courage of the human spirit, and features an unbelievably funny cast of supporting characters, the strangest dog you'll ever encounter, and a heroine you'll never forget.

This was one the first of a new genre. I know that some readers 'poo poo' chick lit, but come on - we all need to have a fun read once in a while right? This book doesn't take much contemplation or effort, but you can relate to her character. How painful it is to be heavy, to have a mother you would rather not be around, the boyfriend that you keep because you don't really like, etc. It doesn't always match reality, but hey that is why I read - so I can forget about the real world.

Quick and easy read. The end was a little unexpected, but good. Jennifer Weiner hints about this story in her collection of short stores. It gives you a little more information about the boyfriend.